John Redgwick departed at the beginning of October 2020 at his home at Lake of the Pines, Auburn, CA. after a long illness.

John came from Hanford, CA and studied English High School Education at Fresno State University. He was a retired Fresno fireman who can trace his ancestry to the first governor of the Massachusetts Bay Colony, and he was deeply proud to be a Native Son of the Golden West.

He was a true gentleman known for his warm hospitality, who possessed a fierce devotion and protectiveness towards his wife Kevan Kidd, who passed-on in late 2015. He could often be irascible, but was good-hearted and possessed a fine sense of humor. He could often be seen in public wearing a kilt as if he was born to it. He had a lust for learning, having fun, and the fine art of relaxing. He loved reading, classical music, knives and firearms, leatherwork, hunting, fishing, a good whisky, and good food shared with friends. He cared about the dogs and cats that shared his life, and had a special affection for trees. He enjoyed diving for abalone along the Pacific coast while playing with otters and instructing others in the art of diving.

A few words by John’s friends.

“Years ago we belonged to a gun fight group called, T.A.T.A’s.( Time and Time Again Society.) organized by Tom Gardner. We were going to Marysville to be part of Beckworth Days and John was Black Bart. He arrives early, calls the police department and tells them he is going to walk around town to help advertise the event. He does so with a bag over his head and carries a double-barrelled shotgun, needless to say the little switchboard was overloaded with calls about a man with a shotgun walking around town and he was surrounded by police who had to answer the call.”

“We spent many a wonderful weekend at Kevan & John’s house in Lake of the Pines. We were part of Father Christmas’s entourage in Sutter Creek & Nevada City. John was always grandly dressed! He was the well dressed gentleman, with the courtly manners! When we were to be in Sutter Creek most everyone stayed at John’s house. Always the perfect host, John would get up earlier than the rest of us & have coffee & breakfast ready for us before we left for the streets of Nevada City. On the last weekend he would fix a turkey dinner & we all brought side dishes & had a delightful party.

When Eric & I got married, I got ready in John & Kevan’s trailer. Just before the ceremony John slipped a very old & valuable gold coin in my shoe for luck. Perhaps an ancient tradition?”

“As his Guildmaster in St. George, I found him thoroughly committed to our mission of teaching history through interactive theatre. He was a “true believer” who studied the period and the roles he played carefully and exhaustively, and there was little he wouldn’t do for the good of the guild. Somehow he always looked perfectly natural and at home in his Tudor costumes, and I sometimes felt that he was born in the wrong era. He attended our rehearsals and events as long as his health allowed him. I will always remember with fondness that he felt that the hilt of our royal Great Sword of State required gilding, so he saw to it that it was done, and donated his efforts. I am unable to look at it without thinking of him and his generosity. We’re honored that he left his costumes, accessories, and history library to the Guild. We will miss him.” 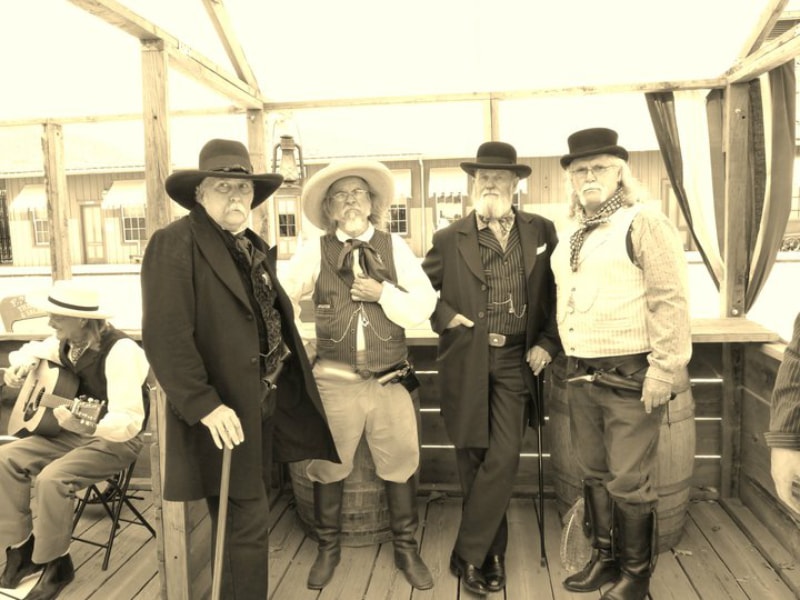